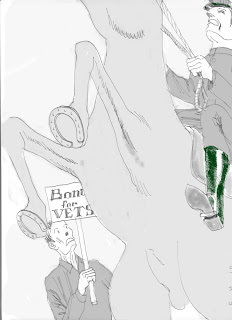 An excerpt from my novel about the Great Depression and an attempted fascist coup in the United States:


"The hell we'll take orders from the likes of you! You're just a pawn! Don't you feel any shame? There are veterans here who can barely feed their families! Why don't you think of justice first before you start lecturing others on their duty?"

But the troops are unmoved. And as they continue their advance, the demonstrators are forced to choose between retreat and the feeble defiance of the un-armed which, soon enough, turns to defeat.

A different officer blows a whistle sharply, and second, more aggressive battalion of cavalry move forward. Some of the soldiers, upon reaching the crowd, reverse their rifles and use their butts like truncheons.

Behind the foot soldier, also advancing, is a column of tanks. In the midst of them is the figure of George S. Patton. He surveys the crowd for a few moments. Then he says to his crews, "Charge!"

The tanks trundle-squeak forward; the infantry stomp in rhythm, the cavalry whinny and attack. The demonstrators are now divided into a series of broken up groups. Some turn to run. Others scream, push and shove. But from several yards away, it seems almost as if the demonstrators might have a chance: the troops and the horses and the tanks do not seem to be achieving a clear victory. Then a shot rings out, followed by another. A woman's voice can be heard screaming hysterically, "Jesus! Lord Jesus!"

This only seems to stiffen some of the demonstrators' resistance, even as someone else, his voice also hysterical, calls out, "Doctor!" and the melée reaches its crescendo.

Full novel at Eclectica:  http://www.eclectica.org/v23n2/harvor.html
Posted by Finn Harvor at 8:34 PM No comments: 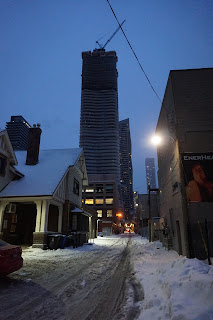 Posted by Finn Harvor at 5:25 PM No comments:

Washington, 1933. The Great Depression is at its worst. The Roosevelt administration is determined to do something, but feels constrained by conservative opinion.
*

The interior of the Oval Office.
It is three days after the inauguration. Roosevelt sits behind his desk, surrounded by advisors, including Lew Douglas, Rexford Tugwell, Ray Moley, Louis Howe and James Farley.
Roosevelt states, "We have to stop this bleeding of the banks."
Lew Douglas says, "We could create our own banks."
Roosevelt: "How do you mean?"
Ray Moley, a soft-spoken man who is going genially bald, cuts in, "We could create a national chain of banks. They would be backed by government-issued bonds. People would have a guarantee their savings are secure."
James Farley, fleshy-faced, earnestly expressive, says, "We can't do that. That would be equivalent to nationalizing the current system."
Rexford Tugwell looks at Farley. "So?"
"The people won't have it. Not the businessmen and the professional folk—the 'doctors and accountants and whatnot.' This is a country built on enterprise, not government interference."
Posted by Finn Harvor at 4:31 PM No comments: